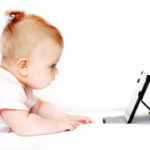 According to several parents interviewed by CBS Pittsburgh, more and more parents are willing to lie about the age of their children to set up a Facebook profile for them. Parents who are already uploading pictures of their kids to the site say that it’s just easier to give them their own profile and tag them in pics — never mind that it violates Facebook’s minimum user age policy.

While it’s easier for parents to share photos of their kids with friends and family members this way instead of via email, there could be significant security concerns for the children involved — especially in the future.

“Everybody has a digital footprint now. From the time you’re born until the time you die, you have some sort of digital footprint,” communications professor Chad Wertley told CBS Pittsburgh. “Will that be a big deal at one, two, three-years-old? No. But, what about when they hit the tween years and the teenage years?”

Indeed, it’s tough to predict the ways that photos could be used to gather data or information in the future. There’s already a problem with people stealing pictures of kids from Facebook; what could cybercriminals do with a literal lifetime’s worth of pictures and content?